It’s a beautiful world; across many travels I meet wonderful people from various cultures & walks of life.
It is my great honor and privilege to bring to you the lives of a few such people.
I present to you Tribal India – The festivals of the 3 major Tribes of Meghalaya. 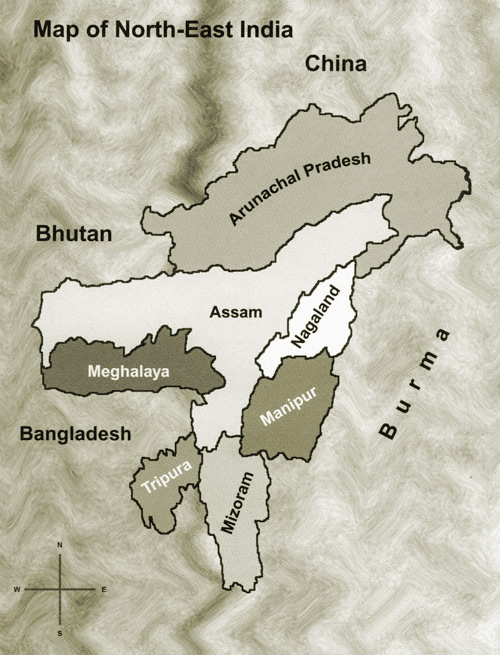 Meghalaya, is a small state in north-eastern India. The word “Meghalaya” literally means “The Abode of Clouds” in Sanskrit and other Indic languages. Meghalaya is a hilly strip in the eastern part of the country about 300 km long (east-west) and 100 km wide, with a total area of about 22,720 km².

Meghalaya comprises of 3 major Tribes (Khasi, Garo & Jaintia) those who inhabit the serene province. There are other sub-tribes varying on the region they belong from.

Each State has various tribes & sub-tribes those inhabit it and each of these tribes have a different dialect. The way they live, what they eat, their local festivals all vary from one another.

The Khasi Tribe: The Khasis inhabit the eastern part of Meghalaya in the Khasi and Jaintia Hills. Khasis residing in Jaintia hills are known as Jaintias. They are also called Pnars. The Khasis occupying the northern lowlands and foothills are generally called Bhois. Those who live in the southern tracts are termed Wars. Again among the Wars those living in the Khasi Hills are called War-Khasis and those in the Jaintia Hills, War-Pnars or War-Jaintias. In the Jaintia Hills we have Khyrwangs, Labangs, Nangphylluts, Nangtungs in the north-eastern part and in the east. In the Khasi Hills the Lyngngams live in the north-western part. But all of them claim to have descended from the ‘Ki Hynniew Trep’ and are now known by the generic name of Khasi-Pnars or simply Khasis. They have the same traditions, customs and usage with a little variation owing to geographical divisions.

Social Structure: The Khasis, the Jaintias and the Garos have a matrilineal society. Descent is traced through the mother although the father also plays an important role in the material and mental life of the family. While writing on the Khasi and the Jaintia people, David Roy observed, ‘a man is the defender of the woman, but the woman is the keeper of his trust‘.

In the Khasi society the woman looks after home and hearth, the man finds the means to support the family, and the maternal uncle settles all social and religious matters. 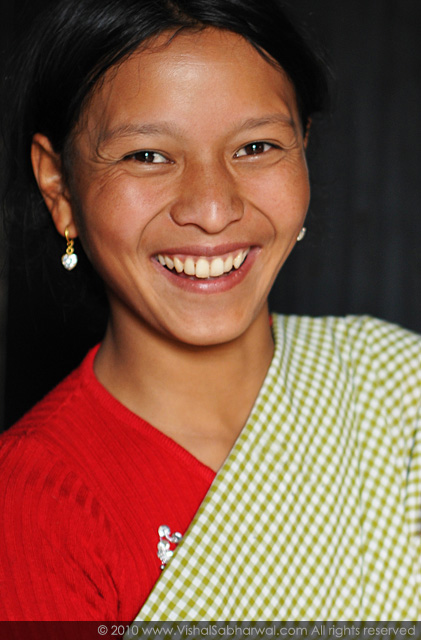 Inheritance: Khasis follow a matrilineal system of inheritance. In the Khasi society it is only the youngest daughter or ‘Ka Khadduh’ who is eligible to inherit the ancestral property.

If ‘Ka Khadduh’ dies without any daughter surviving her the next elder sister inherits the ancestral property and after her and the youngest daughter of that sister thereafter. Failing all daughters the property goes back to the mother’s sister, mother’s sister’s daughter and so on.

The Ka Khadduh’s property is actually the ancestral property and so if she wants to dispose it off, she must obtain consent and approval of the uncles and brothers. 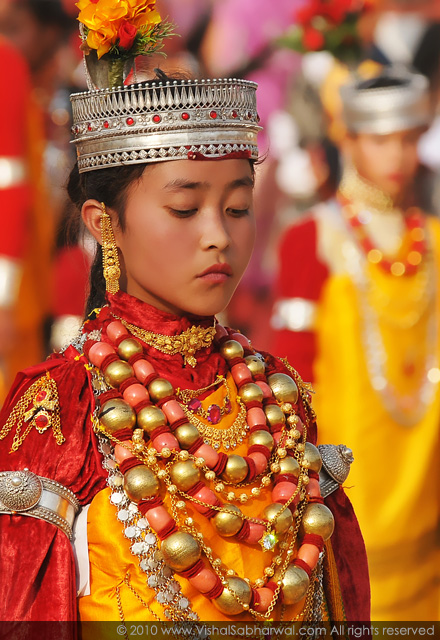 The Shad Suk Mynsiem reflects the matrilineal and patrilineal aspect of the Khasi society. The man with whips and swords circles the virgins as protectors of the honors of womanhood having a single strength, while the men have in them twelve strengths. Shad Suk Mynsiem is celebrated in the month of April at the Weiking grounds in Shillong and at other places in Meghalaya.

Nongkrem Dance: The famous Nongkrem Dance is held at the courtyard of the Syiem of Hima Khyriem (chief of Khyriem) at Smit Village. For serious travellers and students of culture and history there is a lot to learn from this dance of the Khasi tribe which is held every year at Smit which is 15 Kilometers from Shillong.
It is one of the most important festivals of the Khasi tribe and is celebrated with pomp and gaiety. Hundreds of travellers from different parts of this country and abroad come to witness the festival as it is performed in the traditional style by the Syiem; the head of the Khasi state and Ka Syiem Sad; the Syiem priestess, who is considered the caretaker of all religious ceremonies, the ministers and the common people. The fourth day of the festival is when most visitors throng to the courtyard to witness the dance performed by ladies and men decked-up in some of the most exquisite traditional attires. Young virgin girls wear expensive silk and gold ornaments and dance the Ka Shad Kynthei in the inner circle of the arena, while men dress in dhoti, full-sleeved shirt, sleeveless coat and a turban with sword in their right hand perform the Ka Shad Mastieh in the outer circle. 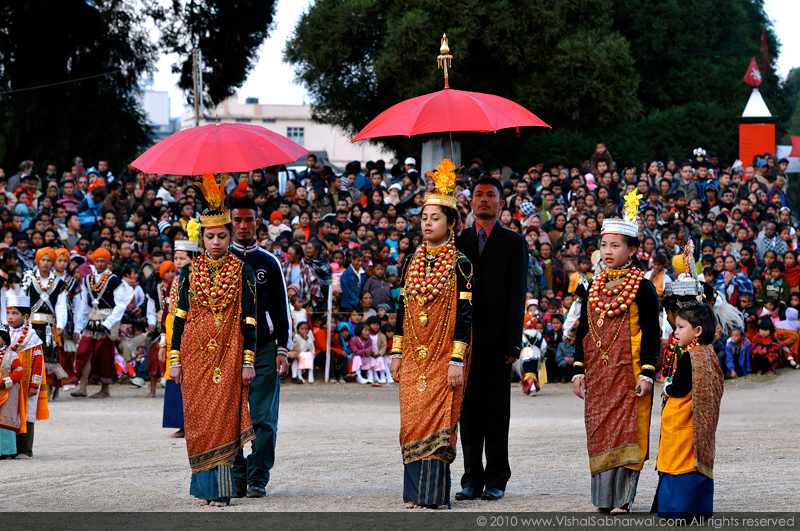 The Garo Tribe: The ethnic people who reside in the Garo Hills are known as the Garos. The word Garo has been coined after the name of a small group of the Garos residing in the central part of the southern hills. Besides the Garo hills there are Garo settlements in the plains of Assam and Bangladesh.

Dress: The Garo women wear a piece of cloth around their waists and put on a blouse or vest. The men usually in addition to clothes wear a turban. On all festive occasions, the Garos, irrespective of sex wear head dresses with rows of beads stuck with feathers of the hornbill. Males and females both wear bangles and earrings. Educated and well-to-do Garos in the towns wear western dresses. 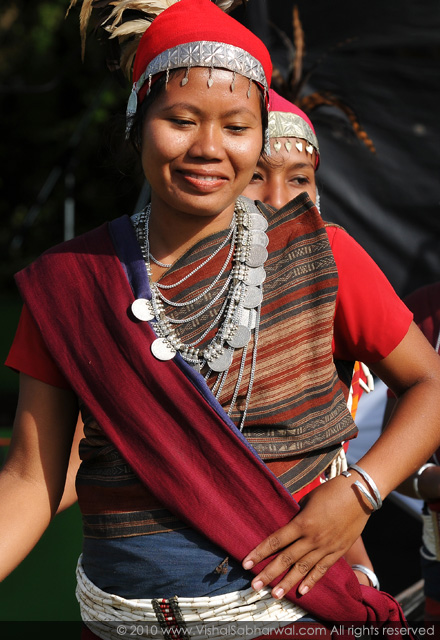 Wangala Festival: The Wangala is a Garo post-harvest festival that marks the end of the agricultural year. It is an act of thanksgiving to the Sun God of fertility known as Misi-A-Gilpa-Saljong-Galapa. A nagara (a special drum used for calling the people on solemn occasions) is beaten. The social aspect of the Wangala Festival goes on in the villages for a number of days, with eating, drinking and merrymaking. This is the most popular festival of the Garo people and is held in November. The precise date being fixed by the headman each year. The men and women dance in mirthful gaiety with the beating of drums, blowing of the buffalo horn trumpets and bamboo flutes. The men wear dhotis, half-jackets and turbans with feathers. The women wear colourful dresses made of silk, blouses and a head-wrap with feathers. The highlight of the festival is when 300 dancers and 100 drums descend on the field in all their splendour in celebration. 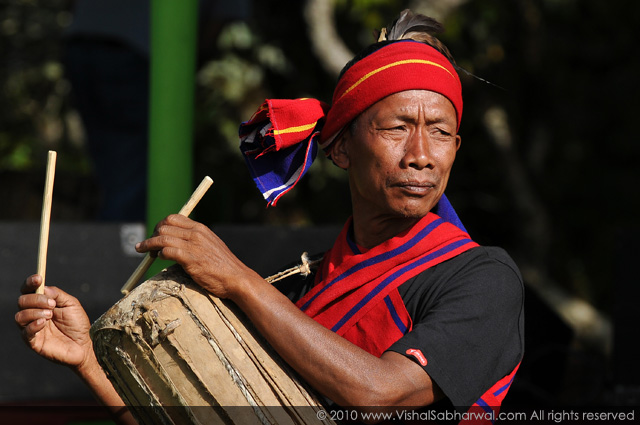 The Jaintia Tribe: People living in Jaintia Hills are ethnolinguistic group of people and are believed to be of Indo-Mongoloid race although speaking a distinct Austric language belonging to the Mon-Khmer group. With regard to the social origin of the Jaintia people there is an indigenous theory according to which they belonged to a common race which occupied a large area of Northern India, Burma, Indo-China and parts of South China in the Neolithic period.

The people residing in the central region of Jaintia Hills are called “Pnars” by those living in the southern and northern regions and who are in turn called as “Wars” and “Bhois” respectively by the Pnar. All three are collectively known by the generic name: Jaintias” or “Synteng”
In the Pnar Society the family is the core of social organization. Though it is mother-centered the authority of the house lies with the eldest maternal uncle. He is the head of the clan & represents the same in any village matters. But marital & other institutional affairs are based on the matrilineal system. Matriarchy in its true sense does not exist in the Pnar Society. In-spite of the female ownership of property the woman’s elder brother is the actual head of the household & when the husband after the initial matrilocal residence establishes independent house he is the undisputed lord of the Family. In the case where there is no female child the mother is succeeded by her son thus the system is called matriarchal only by courtesy. Nowadays there has been tremendous change in the way of life of the Jaintia People & is not uncommon case for a man to live together with his wife & children in separate houses. The house is solely run by the Father of the house and not by Uncles.
Matriliny in Jaintia Hills does not mean that the female are more supreme than the males but it is that tracing of descent is done through a female side. The father no doubt is the head and occupies an honored position in a family. 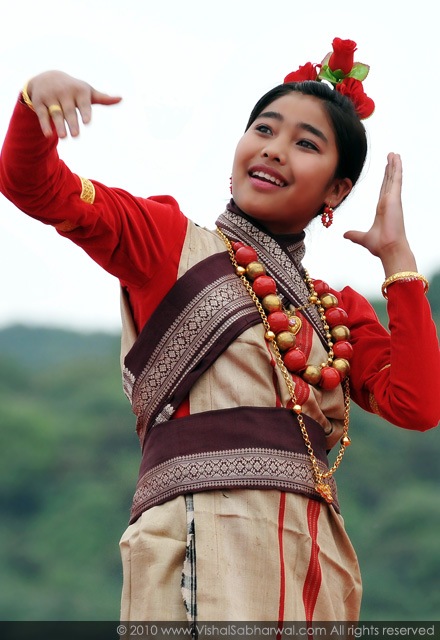 Behdeinkhlam Festival: One of Meghalaya’s most colourful religious festivals; Behdeinkhlam, is celebrated for three days during July at Jowai. The word literally means ‘driving away of evil (plague) by wooden sticks’.

This Festival is connected with a series of religious rites. People dance on the street to the accompaniment of drum beating and pipe playing. The women do not participate in the dancing but have an important role to play at home by offering sacrificial food to the spirits of the ancestors.

Each locality prepares a decorative tower-like structure called a rath. These are carried by 30 to 40 people to a small lake at Aitnar for immersion. The festival climaxes when the khnong (the most sacred tree) is brought to the centre of each locality.

In the afternoon datlawakor is played  between two teams from the upper and lower valleys of the Myntdu River. It is a kind of soccer with a wooden ball. Those who win are believed to be blessed with a good harvest.

Laho Dance: The Jaintia People have another dance festival for entertainment. It is called the Laho dance. Members of both the sexes participate in this dance festival attired in their best finery, usually two young men on either side of a girl linking arms together and dance in step. In place of the usual drums and pipe there is a cheer leader, usually a man gifted with the talent of spontaneous recitation. He recites ribald couplets to the merriment of the audience. 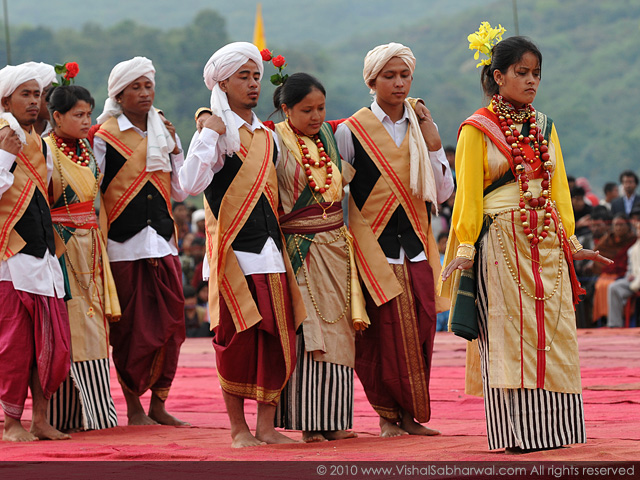 Chad Sukra: The annual Chad Sukra (sowing festival) is celebrated during the middle of April or early May every year by the Pnar people.

Pnar people believe that a farmer could start sowing the seeds on his land only after the festival is over. The festival is observe to invoke God; the Creator to protect their crops from all forms of natural calamities besides ushering in peace and harmony among the people. 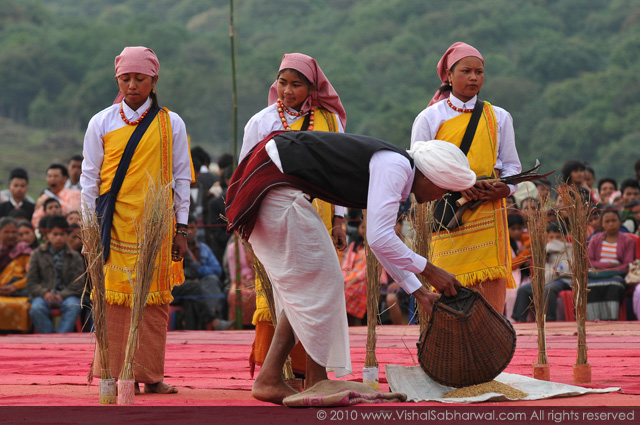 I do sincerely hope you have enjoyed this article, as much I have meeting the Tribals & photographing them. I would request you to leave your valuable thoughts/comments in the post below.

Many Thanks & Kindest Regards,
Vishal Sabharwal