Photography workshops & Travel; the most recent ones were to 2 beautiful foothill destinations of the Himalayan state of Uttrakhand in Northern India. The workshops were in collaboration with Club Mahindra at two of their beautiful Resorts in Kanatal & Mussoorie respectively, as the venues.

I am an independent photographer & have followed my passion since the past 21 years. Over the recent year decided to share my knowledge & skill with photography enthusiasts eager to learn the fundamentals & creativity of this art.

Kanatal is a beautiful holiday destination roughly about 75kms from Dehra Doon with Mussoorie in-between.

The workshop was planned over 4 days between the two destinations. Mussoorie the first venue being closer considering the long road-trip from New Delhi ushered the workshop. I was re-visiting Mussoorie after 12 years and didn’t know what to expect.

The following day, morning of the first workshop I woke up fairly early to the singing of birds’ right outside my bedroom window. I decided to fix myself some tea and parked myself on the patio adjoining the room.

This spot was magical, believed to be the best part of the room assigned to me. A private little terrace with a 180 degree view overlooking the Doon valley to its left and Mussoorie straight ahead. Every now and then a cloud of fog hitched a ride with the crispy mountain breeze and turned everything white. Sitting there sipping my tea it all seemed in slow motion, a feeling of flying and an elevated state of emotion but soon I had to break away and commence my day.

Having made all the arrangements for the workshop at the conference room a hearty breakfast awaited me, with the first workshop soon to follow.

With all registrations in place for the day we started the workshop with a quick round of introduction of the participants, followed with the first module.

The smooth flow and active participation was a warm welcome. For more info on the workshop modules please click on the image below. 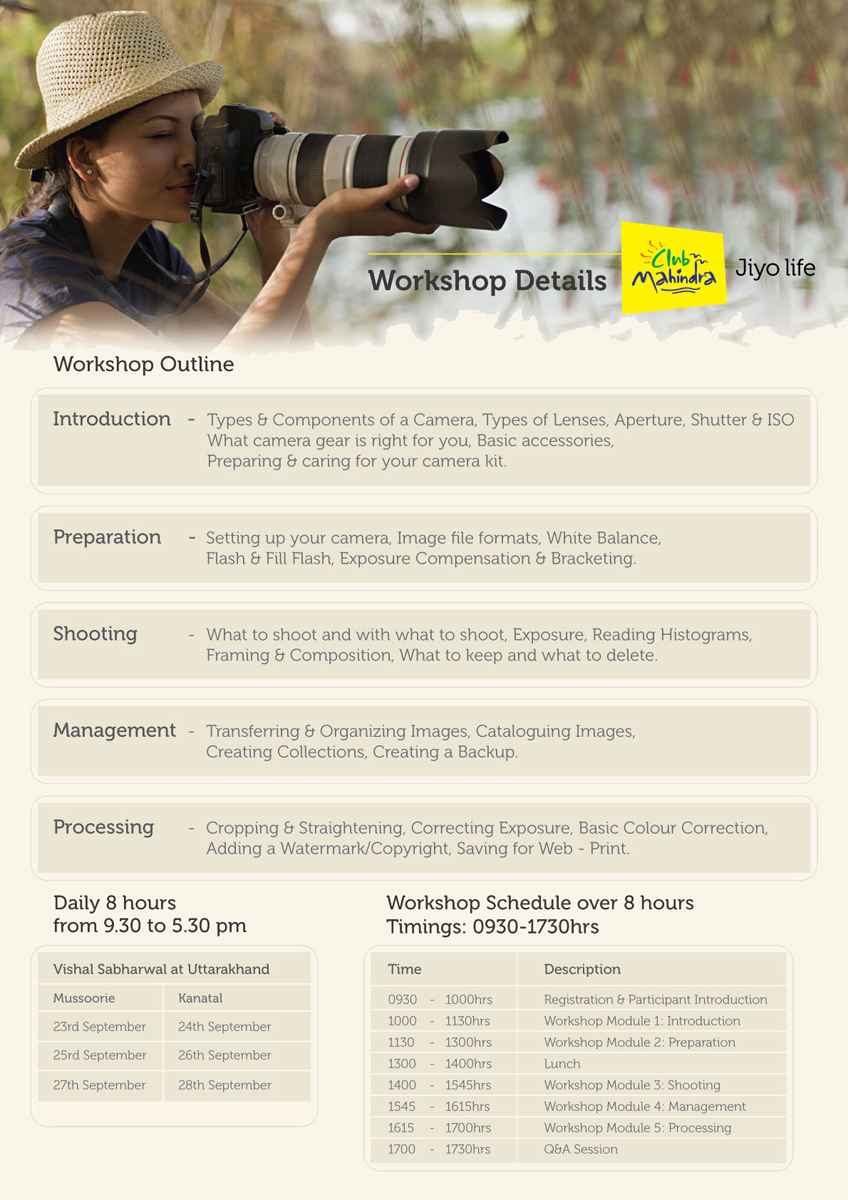 Before we knew it, it was already lunch time. Post lunch we picked up from the 3rd module and the participants were directed to put their newly acquired knowledge to practice. An hour following lunch they were involved in this activity. The participants were excited to discuss their results each time they captured something. For most it was experiencing a professional photography workshop for the first time. 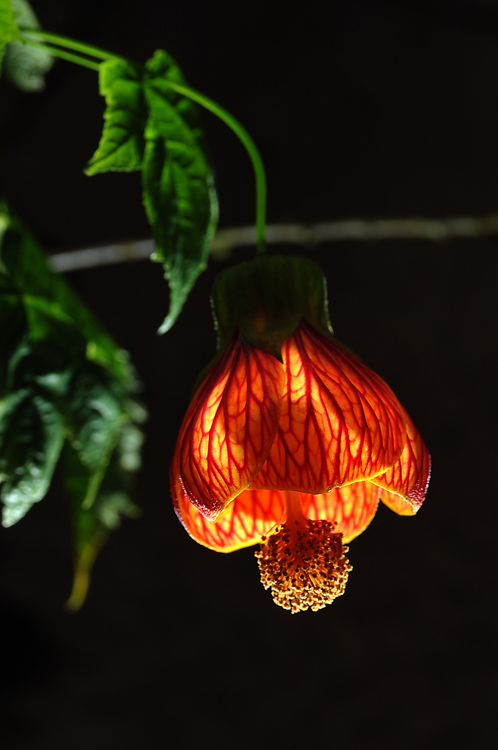 Once we returned to the conference room the participants were still discussing their shots with other participants of the workshop. The excitement is always a positive sign of knowing that individuals have a grasp on most things that have been shared with them.

In another 2 hours we had already covered all the workshop modules and wrapped up the day by discussing assignments for the participants. Even before I could finish, they were eager to head out and put their skills to test. 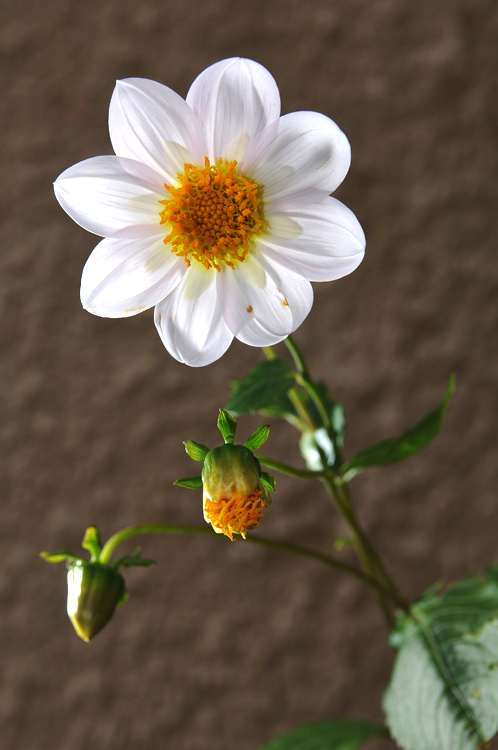 With still a couple of hours to dinner, I decided to do some photography of my own. Avalon resort at Mussoorie is situated on a hill top & access to rooms is solely by foot; up, down & around the same hill. Each of the rooms offered a unique view. 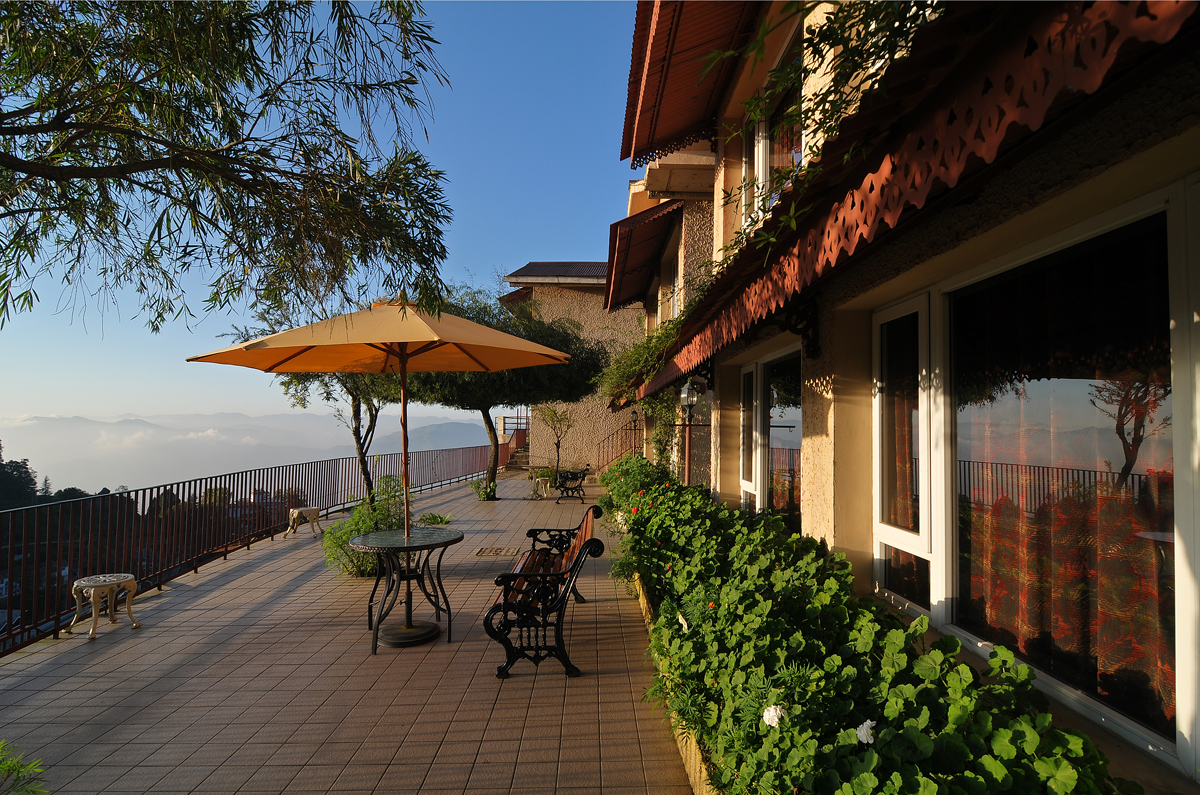 Avalon is a beautiful and a peaceful resort said to be roughly 20 years old. Located almost in the heart of Mussoorie, the approaching road climbs up 1000 meters from the famous Mall Road. This elevation helps keep the hustle & bustle of the hill town far from the ears & sight. 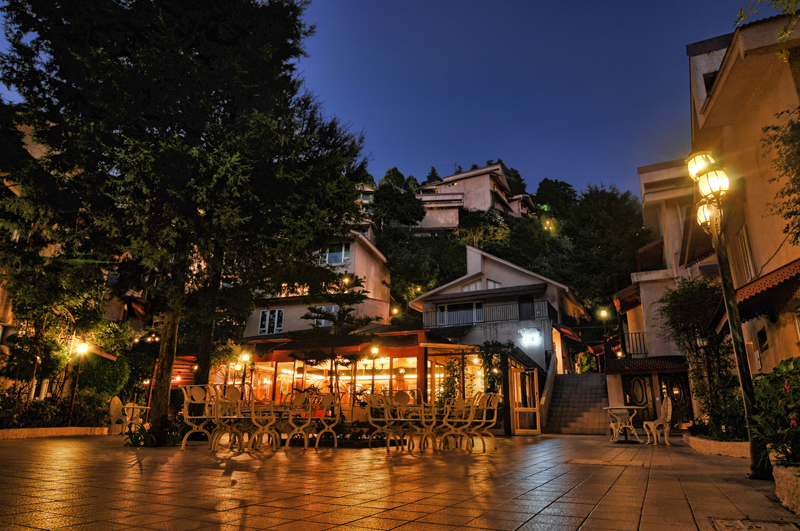 With a heap of indoor activities & games to keep you entertained almost all day, you will eventually need to break away if you wish to explore the local sightseeing spots.

After a fair share of photography finally it was time for dinner. A sky flooded with clouds, as I looked up seemed that they were there to stay. But soon after dinner the sky magically cleared revealing an outstanding view of millions of stars. This lured me in to capturing a few more images, this time really long exposures to get the star trails that are ever so hard to photograph in almost any city in India. 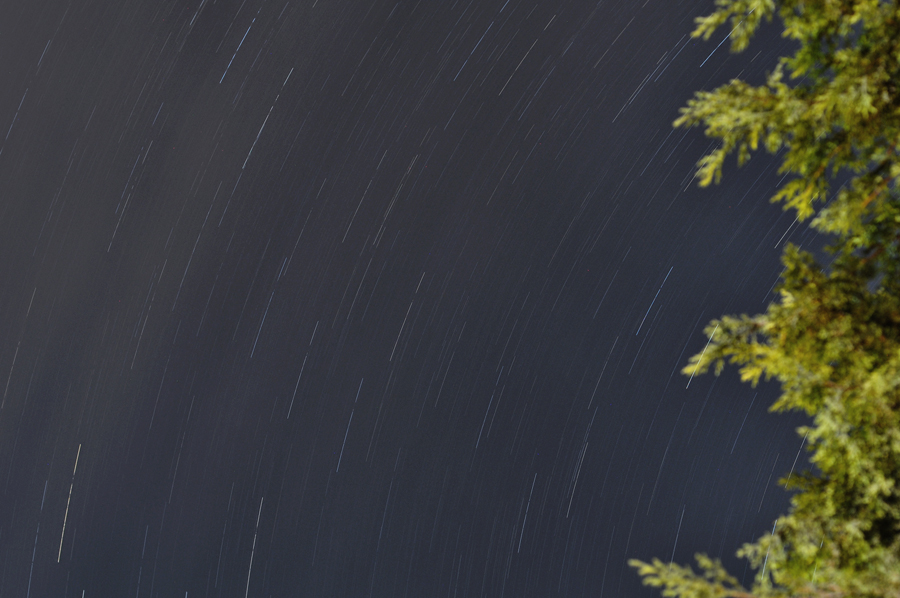 Another 2 hours just flew by, I was getting increasingly tired, happy with a handful of images that I made and I decided to call it a day.

The following morning I found myself waking up to a beautiful dawn & the songs of birds again. It was just past 5 in the morning with a crisp chill in the air. With the same routine as the previous day I sat out for an hour and enjoyed an elated state of mind with nature all around me.

Today I was to depart for Kanatal; the second destination on this travel, a local cab arranged by the resort awaited. 10 minutes into my cab ride and I was craving for my motorbike, the curving awe inspiring roads from Mussourie via Dhanaulti to Kanatal are a delight. I caught glimpses of the great snow-clad Himalayan ranges play hide & seek during the entire 1 hour drive. It was chilly as we drove up but I insisted to leave the car window open inhaling the fresh mountain air, something I so dearly yearn for in the cities.

The entire 45km to Kanatal we continued to steadily ascend, when we finally reached our destination the altimeter on my watch displayed an altitude of 2600mts while Mussoorie at 1900mts. 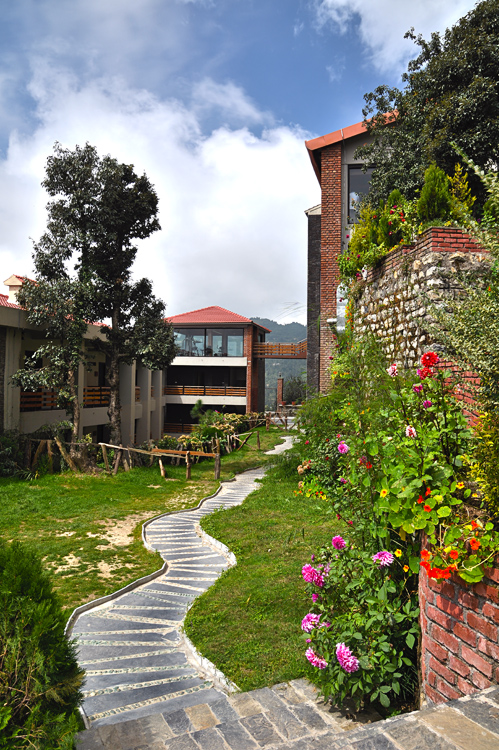 We reached Kanatal fairly early and still had 30 mins to breakfast which starts at 8am. I checked in and overlooked the arrangements for the workshop planned for the day. Besides everything arranged perfectly, the tables, chairs, water bottles, notepads, pens, projector & the whiteboard, I noticed something peculiar. There was a dj console and disco lights neatly placed on to the other side of the hall. And I realized it was the first time I was to conduct the workshop in a space that conveniently transformed into a disco & a conference room when needed, brilliant! My imagination started to wander, but pulling away from all the ideas for photography I headed for breakfast leaving all arrangements as is.

By half nine all the registered participants gathered at the venue and we commenced with a round of introductions. To my surprise a gentleman, one of the participants made a mention of his newly acquired DSLR just a week prior to the workshop. He continued to tell us that photography always interested him and that since a few weeks he was leaning towards purchasing a new camera, the communication about the workshop was the final push that got him one. Everyone eager to learn in detail about their cameras we began with the first module. A similar flow took place for the entire duration of the workshop.

During the day I had noticed a dense Deodar forest opposite the resort and by evening decided to take a walk inside lugging my camera. There were monkeys all over feeding and creating their occasional havoc at the approach into this forest. Ignoring them and focused I continued on my track.

Thousands of beautiful Deodar trees on my left and a few on my right with the snow-capped Himalayas in the backdrop looked ever so stunning in the evening light. 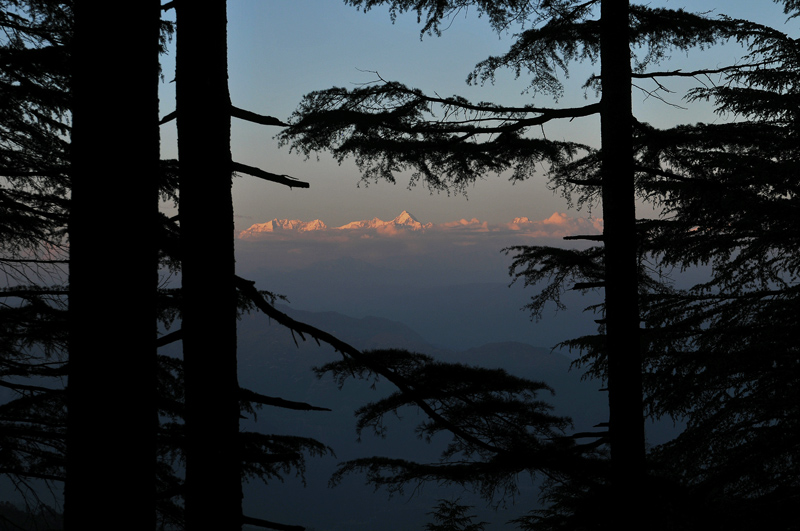 I continued to pace deeper into the woods and the mountains seemed to follow along. A 25 min walk and I glanced upon a few huts across a field from me, seemed to be a small village settlement surrounded by Apple orchards.

I spent a little time relaxing and absorbing the fresh air and the serene forest around me.

All along the path there were hundreds of tiny flowers and I began to take photographs of them and the beautiful forest that surrounded me. 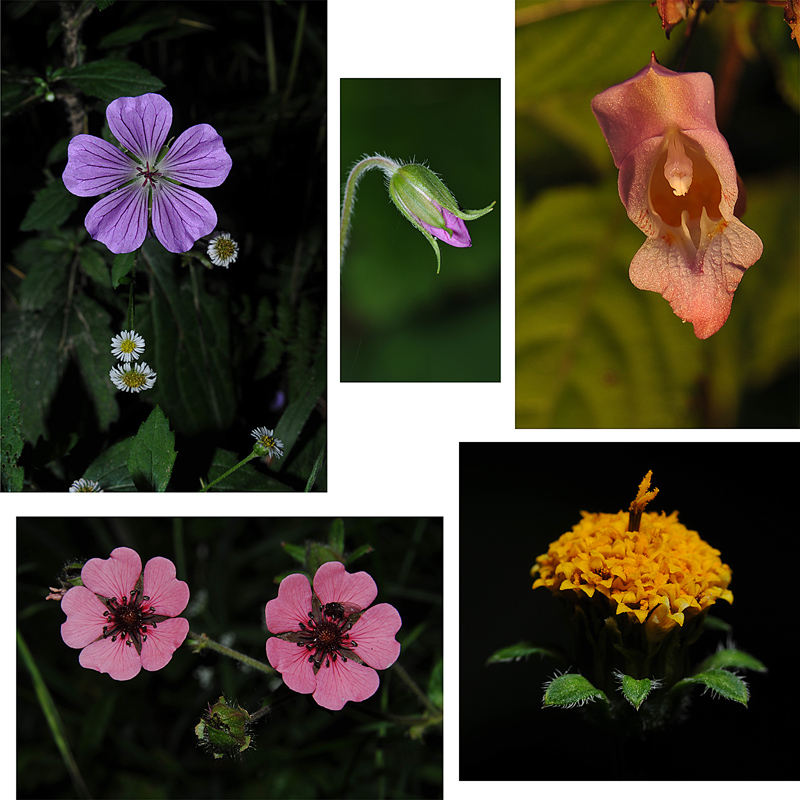 It was already beginning to get dark as I started my walk back to the resort. 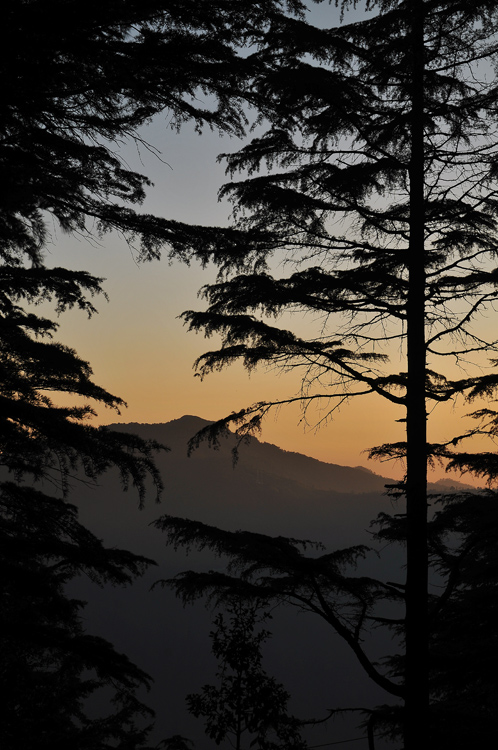 The guard and a few locals at the resort gate had shared stories of 3 leopards that frequented the forest just when I had made up my mind to venture in. Knowing about the leopard presence I felt overwhelmed about visiting the forest even more & sharing the same space with such magnificent & elusive animals. Not keeping a lookout but somehow hoping to glance upon just one of them on my way back was a thought I marched back with in my mind.

The resort cannot be seen from the forest, only when I got to the main road I saw the resort beautifully lit as it welcomed me in. The Kanatal resort is a fairly new property, with all modern amenities.

By the time I got back I was pooped and found my way straight to the room. Fixed myself tea sat out in the veranda and watched dusk turn to night. 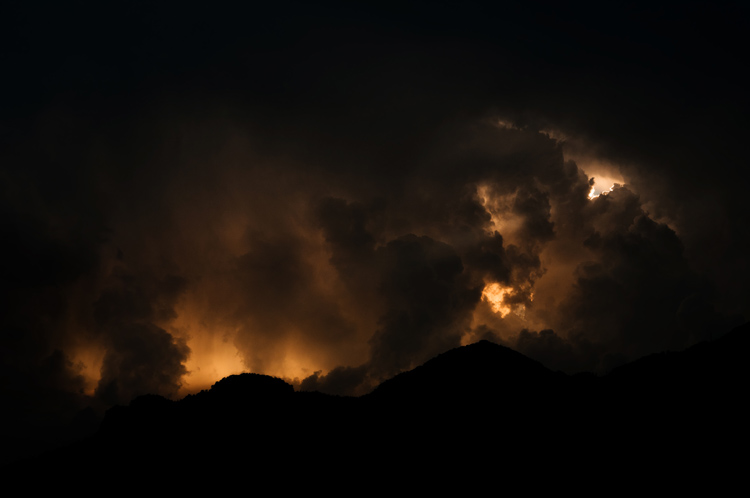 I had already built a good appetite for dinner. During the day I got talking to the head chef and became instant friends and recalled that he promised a platter of kebabs as starters for dinner. The food at this resort is surely something to look forward to, all my meals were scrumptious!

The warm welcome & courtesy of the staff at both these resorts made my stay a very pleasant & memorable one. And to top it all, I had wonderful feedback of the workshop from the participants.

All in all a fantastic holiday work-trip, or perhaps both…